[Lagos] Formula manufacturers continue to defy international regulations and target health centers to market their products, WHO says study on formula marketing and its impact on breastfeeding programming.

This practice is particularly prevalent in developing countries such as Nigeria and the South, where television marketing is less popular and where formula companies target health workers.

At Ipakodo Health Centre, Ikorodu, Lagos, Nigeria, SciDev.Net meets a nurse who takes care of pregnant women and young mothers. She is one of many health workers who have witnessed the marketing ploys of infant formula manufacturers.

“It’s not news that they’re coming, they’re getting approval from the primary health care board. Sometimes they come to help finance some of our programs but ultimately it’s to market their product,” says the nurse, who requested anonymity because she does not have the power to speak to the press. SciDev.Net.

The WHO report, a multi-country study published in February, notes that healthcare workers in eight countries surveyed said they had been approached by representatives of infant formula companies.

“Health professionals in Morocco, Nigeria and Vietnam reported that contact with formula manufacturers was extremely common in public and private health care settings.”

“The formula brand reps are targeting different types of healthcare professionals – including pediatricians, nurses, dietitians and hospital administrators – with a range of incentives, including research funding, commissions on sales, ambassador roles, merchandise and gifts and all paid promotional travel expenses.”

The targeting of health workers and infant formula marketing centers has direct consequences on breastfeeding rates.

In Nigeria, about 45% of postpartum women received a recommendation from a health professional to feed their infants with formula, according to WHO report revealed.

“People come to market products to us and we seek advice from caregivers.”

Omolayo Adetutu, a mother who attended Ipakodo Primary Health Care Center, said SciDev.Net “People come to market to us, and we seek advice from caregivers,” but adds that doctors and nurses emphasize exclusive breastfeeding.

According to the WHO multi-country report51% of 8,528 pregnant and postnatal women reported being exposed to infant formula marketing in 2021.

While the International Coded Marketing of Breastmilk Substitutes – a WHO public health agreement implemented in 1981 – exists to regulate the marketing of infant formula, companies continue to ignore this code.

In its report, the WHO condemned what it called widespread marketing by formula manufacturers. He described the marketing strategies as “invasive” and breaking “international standards” to influence parents’ decisions on how to feed their babies.

The report found that women were much more likely to choose formula feeding after being exposed to the marketing of breastmilk substitutes because the marketing messages contained misconceptions about breastfeeding.

According to the report, the messages included claims that their products almost resemble breast milk and that formula should be the first food, especially for babies born by caesarean section, babies of HIV-infected mothers and babies whose mothers have insufficient milk production. In turn, health workers recommend these formulas to mothers based on this information.

“Usually we give this (formula) to make sure the baby is not hungry. When the mother is getting stronger, we encourage her to breastfeed and not continue formula feeding. say we rigorously preach baby-friendly,” the Lagos nurse said.

“These mothers even feed the baby paps [maize porridge] because many have low levels of education and income, which puts babies at risk,” said another nurse from the Federal Medical Center in Owerri, Imo State, Nigeria, who also asked to remain anonymous.

“That’s when we recommend formula milk, recommending alternative feeding is the last resort, if we don’t mothers will continue to feed the baby what they see fit,” adds- she.

Cost of not breastfeeding

Evidence has shown that breastfeeding within the first hour of birth and exclusive breastfeeding for the first six months of an infant’s life are known to improve survival and health outcomes.

According to experts, breastfeeding reduces the likelihood of childhood infections, including diarrhea, pneumonia and premature death. It also reduces the risk of depression in mothers.

Nearly 600,000 children die each year from lack of breast milk, a 2019 study Posted in Health policy and planning shows. 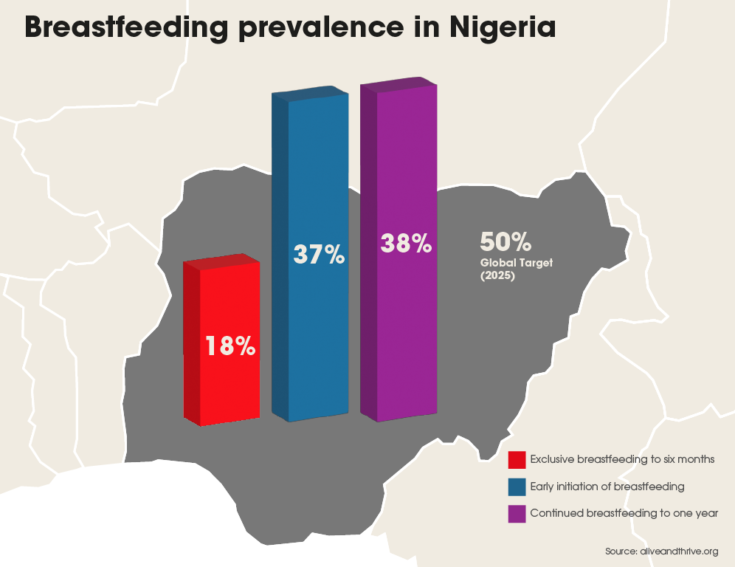 Map showing the prevalence of breastfeeding in Nigeria.

“Breastfeeding was attributed to 595,379 child deaths from diarrhea (38%) and pneumonia (62%) each year,” the study adds. “An estimated 974,956 cases of childhood obesity each year have been attributed to not breastfeeding as recommended.”

About two-thirds of these infectious disease cases occurred in South Asia and sub-Saharan Africa, with 84% in lower-middle-income and low-income countries.

“The total annual global economic losses [to lack of breastfeeding] are estimated between $257 billion and $341 billion, or between 0.37% and 0.70% of global gross national income,” the study found.

The costs of not breastfeeding are significant and should compel policy makers and donors to invest in scaling up breastfeeding and nutrition interventions for children and their mothers to enhance human capital development and economic outcomes in the whole world.

According to nutritionists, better education can help health workers and parents make breastfeeding decisions that will best promote a baby’s health. WHO and UNICEF have developed training Classes health workers to provide skilled support to nursing mothers and help them overcome problems.

“Breast milk banks exist for mothers who cannot breastfeed. We are trying to explore this at the Federal Department of Health where a woman can go to give breast milk. »

“We have prenatal and postnatal conferences, and exclusive breastfeeding is our main topic,” explains the nurse from Ikorodu. “We encourage mothers to make sure they eat well, so they can produce milk, and we let them know that breast milk contains everything the baby needs for the first six months of pregnancy. life and can help protect babies against certain long-term illnesses and diseases, including Sudden Infant Death Syndrome.

Goodness Anyanwu, a nutritionist with the Federal Ministry of Health in Nigeria, says SciDev.Net there are feeding alternatives for women who cannot breastfeed – this may be due to maternal health risks or issues such as inverted nipples.

“Breast milk banks exist for mothers who cannot breastfeed. We are trying to explore that at the Federal Ministry of Health where a woman can go to donate breast milk for cases like this,” she says, adding that discussions are ongoing.

Anyanwu says hormone-induced lactation – where hormones like estrogen or progesterone are given to mimic the effects of pregnancy – can also be explored, while healthy parents who can breastfeed can also be considered. .

This story was produced as part of Dataphyte’s 2022 Media Fellowship.

What impacts a woman’s contraceptive decisions while breastfeeding?

The qualitative study in BMC Pregnancy and Childbirthstresses the need to support women who cannot breastfeed and to educate women on the benefits of contraception for the newborn. “Women routinely receive breastfeeding and contraceptive counseling throughout their antenatal and postpartum care, but little is published about patients’ priorities, desires, and experiences with this peripartum counseling,” […]

Doha: The Ministry of Public Health is working to build and prepare the capacity of breastfeeding counselors in the State of Qatar under the Baby Friendly Hospital Initiative. In this context, the Ministry of Health organized a one-week workshop to train health practitioners specialized in counseling on the skills needed to support mothers and their […]

A Montreal mother says she was appalled and embarrassed after being told by an Eaton Center security guard to stop breastfeeding her baby or have to leave. Isabelle Côté says she was at the mall on Sainte-Catherine Street last weekend when four-month-old Leopold got hungry, so she sat on a bench to feed him. “The […]