On-campus housing has been provided for breastfeeding mothers with the creation of three spaces allowing breastfeeding and expression in a private setting with the necessary supplies.

The law has enshrined in law that employers must accommodate pregnant employees and have designated lactation spaces that are private, comfortable, and non-toilet.

Associate Professor of Spanish Tanya Romero-Gonzalez helped found the Women’s Faculty Caucus in 2016 and was one of the Caucus members who advocated for lactation space on campus.

“We started this process in 2018 in one of the WFC committees,” Romero-Gonzalez said. “This was started by the Work Life Balance Committee and we presented an evidence-based petition to the Insurance and Benefits Committee that listed the benefits of having a lactation room on campus.”

Romero-Gonzalez said some of the benefits of a lactation room named in the petition were increased research quality and increased student retention.

In addition to these benefits, the law required it and the State of Murray did not meet this requirement. Romero-Gonzalez said most faculty members should express their milk in their offices. Not everyone is comfortable with this, and not all faculty members have private offices.

“Murray State should provide a room and they should work with the Office of Institutional Diversity, Equity and Access because this was official housing,” Romero-Gonzalez said. “I know people who use a different room from their office, but not all spaces are equipped with what they need. This is why it is important to have an official space because we do not want obstacles to meet lactation needs.

In advocating for the lactation room, the caucus worked with and contacted several other campus groups. The caucus reached out to the school administration, benefits committee, human resources, and the ADVANCE team to turn the wheels toward meeting campus needs and inclusiveness.

For Romero-Gonzalez, establishing the lactation room is part of a larger mission to create a more accommodating environment for caregivers.

“We want to have support for teachers providing care because it’s difficult right now to do our job with young children in the midst of the pandemic,” Romero-Gonzalez said.

Associate Professor of Sociology Diane Nititham has been involved in advocacy efforts for a lactation room.

As a mother, Nititham had her own experiences with the need to breastfeed on campus.

In 2017, she had an experience she describes as “strange” and said many other faculty and staff had had similar experiences.

“I was attending a faculty summit in the fall before classes started and asked if there was space to pump because I was supposed to be at the Curris Center all day,” said Nititham. “I went through my department manager who told me to contact the provost’s office, then I contacted the IDEA office.”

Nititham was informed that there would be an open office for her which would be private and fitted out with the supplies needed for her lactation.

However, when she went to the office to settle down, she saw that was far from the truth.

“The person’s office provided me with a clear door and they happened to be home sick, so I don’t know the plan if the person had been there,” Nititham said. “I went in and it wasn’t installed, so they had to move things off the table so I could put the pump on the table, and they went to the toilet and said, ‘We’re going to improvise. And they got some paper towels and just taped them on the door so I could have some privacy.

The environment was not at all ideal for breastfeeding. His own experiences, combined with others, are part of why Nititham found it necessary to advocate for a lactation room.

“It’s important for our communityty to provide lactation spaces for those who work here and live here in welcoming spaces instead of borrowed spaces,” Nititham said.

Following advocacy by Romero-Gonzalez, Nititham and the Caucus, there is a lactation room in room 153 of the Blackburn Science Building. The room can be reserved on a Google calendar linked to the Women’s Center page on murraystate.edu. 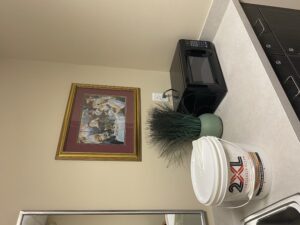 “Blackburn was determined because it was under construction, but ideally every building would have a lactation room, but we’re going to start with one,” Romero-Gonzalez said.

In addition to the Blackburn Lactation Room, the Women’s Center has created a caregiver-centric space called the Family Room in the Oakley Applied Science Building.

The area can be used as a lactation space and is a child-friendly location at Murray State.

The Family Room is a multi-purpose room located in the Oakley Applied Science Building. The room can be used as a child-friendly space and a lactation space. Compared to the Blackburn space, the family room is first come, first served and does not require reservations.

Across 16th Street, there’s another lactation space at Alexander Hall that was built almost overnight, two nights to be exact.

“I was on maternity leave, and when I came back, Amy and our former administrator had come over and talked to me about an idea to do a lactation room, and then it came to nothing,” said Darnel. “The Friday before semester started, I went to see Amy and said, ‘Let’s go find an office and just look for a place,’ and then we found an office and then I said, ‘Amy, let’s just that.

Darnell and Levering moved the chairs around empty desks and went to Dollar Tree to get a rug, fake flowers and snacks and a fridge which they borrowed from the dean’s office to make it more comfortable and fulfilling for those using the room.

“We finalized the room in about two days,” Darnell said. “We did it only because we had tremendous support from Dean David Whaley. He was full on board and we asked him if we could make it a permanent space, he said yes.

After Room 3103 was converted, Darnell posted a Facebook post about it and received around 20,000 views. He got so much attention that people started donating. 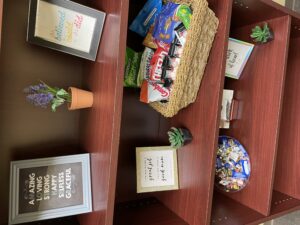 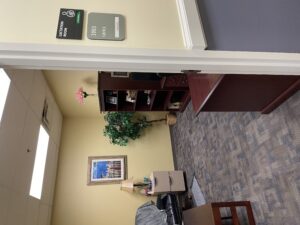 Inside the Alexander Hall lactation room. (Photos by Jayden Hayn)

“A friend contacted me and she was like, ‘How can I donate? ‘” Darnell said. “She donated some money and we were able to buy the lactation room sign that goes back and forth to show if it’s available or in use.”

those who want donate can do so on the Murray State Foundation website at bit.ly/coehsffe!.

To register to use the room, there is a Google calendar accessible from a QR code on the lactation room flyers displayed on campus. Darnell and Levering hope to use their experience with their lactation room to advocate for more such spaces in Murray State.

“It would be nice to have one towards the Business Building, Sparks Hall, so there are good places on campus everywhere,” Levering said. “We want students, faculty and staff, if they’re in a building that doesn’t have space, we have space for you. You are welcome to use our space.

LANSING — Doodooshaaboo, or breastfeeding, is a traditional practice in the Anishinaabek culture, but today’s Indigenous mothers and babies have statistically one of the lowest rates of exclusive breastfeeding at six months of age in all races or ethnicities nationwide, according to the American Academy of Pediatrics. The organization recommends that babies be fed exclusively […]

Tricare will cover Doulas, lactation consultants for some from January 1

Moms-to-be using Tricare in the United States will have access to the services of a doula and/or lactation consultant under a new program rolled out by the Department of Defense in 2022. The Pentagon announced Friday that it plans to launch a five-year pilot project starting Jan. 1 to examine whether these birthing and breastfeeding […]